Mr Massawe and His School 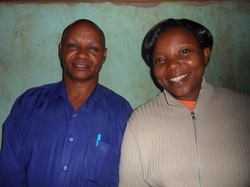 Mr Massawe and his gorgeous wife Susan
Kilimahewa Nursery School was started by one father, Mr Pius Massawe, who could not send his children to school because the nearest schools were located too far from his residence. His children were too young to walk 6-7 kilometers a day, to and from School.

The school takes in children aged between four and seven years old. All the kids are from peasant families, and as the school is non Government funded or subsidised, the parents of the children contribute to the running of the school (if they can).  The parents contribute Tshs 2000/=  almost $ 2 per month that is used to buy pencils, books, chalks etc.  More than half of the parents are not able to pay, as most of the parents in the area are so poor.

The school serves as a care center until the children are old enough to attend a primary school.  Currently there are approximately 70-80 Children and one teacher, Mr Massawe,  who is very reliant on volunteers to assist during the school year.

Mr Massawe runs a tight schedule with children commencing classes at 8.30am. Their first 40min class covers counting, arithmetic and/or alphabet in both English and Swahili, as well as writing skills, they then enjoy a half hour play break followed by morning porridge. Their second class will cover writing and arts and crafts with very limited supplies. When I started Mr Massawe would draw a picture on the blackboard, children first had to draw the image on a piece of paper then would colour it in with the one crayon they were permitted.  Whilst I worked at the school we would photocopy pictures and join the dots exercises from a colouring book, but this can be expensive and not possible to do throughout the full school year.

The biggest expense for running the school is the daily porridge for the 70+ students. Mr Massawe use to put nutritious additives like ground nuts, milk and sugar into the porridge, but nowadays they do not have enough money to buy such things. It costs almost $ 5.5 per a day for 70 children.

Pencils, crayons, paper and excercise books are also expensive and are used scarcely to make them last longer.

Our chicken project from last year, is really starting to help the school generate an income to purchase supplies and to also feed the children eggs one day a week to increase their protein intake.

“I started this Preschool on 2004. I started with my own two children when I learned that there was no any school around for the children. The schools around are about 6-7 km where by a little child of about three to five years can not afford to walk such a big distance. So starting a school  here made the parents to brought their children to school. So it has helped to remove ignorance from the society, also it has removed malnutrition from the society, because most of the children are not eating anything in the morning, but when they come to school they get nutritious porridge. Also we have eradicated child labor, because they used the children in working in their small maize farms, selling bananas and mangoes, but now they are coming to school, so no child labor.
Our aim is to have not only a school for the surrounding children, but also for the Orphans who are now so many due to AIDS Epidemic, and no body is caring for them. As you know the countries of Africa, no body is caring for any one! The number for these children is now at an alarming rate. We want them to be in a boarding school here."